The Attack on Greenwood

The 1921 Attack on Greenwood was one of the most significant events in Tulsa’s history. Following World War I, Tulsa was recognized nationally for its affluent African American community known as the Greenwood District. This thriving business district and surrounding residential area was referred to as “Black Wall Street.” In June 1921, a series of events nearly destroyed the entire Greenwood area.

On the morning of May 30, 1921, a young black man named Dick Rowland was riding in the elevator in the Drexel Building at Third and Main with a woman named Sarah Page. The details of what followed vary from person to person. Accounts of an incident circulated among the city’s white community during the day and became more exaggerated with each telling.

Tulsa police arrested Rowland the following day and began an investigation. An inflammatory report in the May 31 edition of the Tulsa Tribune spurred a confrontation between black and white armed mobs around the courthouse where the sheriff and his men had barricaded the top floor to protect Rowland. Shots were fired and the outnumbered African Americans began retreating to the Greenwood District.

In the early morning hours of June 1, 1921, Greenwood was looted and burned by white rioters. Governor Robertson declared martial law, and National Guard troops arrived in Tulsa. Guardsmen assisted firemen in putting out fires, took African Americans out of the hands of vigilantes and imprisoned all black Tulsans not already interned. Over 6,000 people were held at the Convention Hall and the Fairgrounds, some for as long as eight days.

Twenty-four hours after the violence erupted, it ceased. In the wake of the violence, 35 city blocks lay in charred ruins, over 800 people were treated for injuries and contemporary reports of deaths began at 36. Historians now believe as many as 300 people may have died.

In 2001, an official Race Riot Commission was organized to review the details of the event. No one will ever know the absolute truth of what happened during the hours of the Race Riot.

However, by examining historical resources, members of the Race Riot Commission determined a number of details to be undeniable. “These are not myths, not rumors, not speculations, not questioned. They are the historical record.” 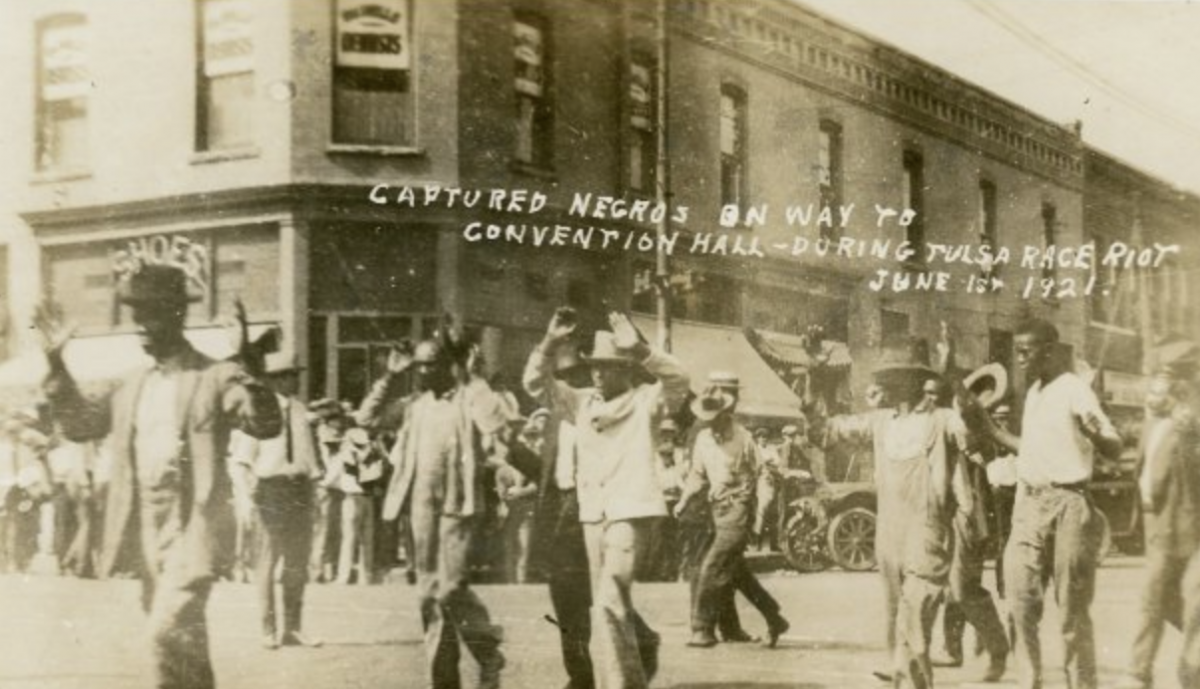 Black Tulsans had every reason to believe that Dick Rowland would be lynched after his arrest. His charges were later dismissed and highly suspect from the start. They had cause to believe that his personal safety, like the defense of themselves and their community, depended on them alone. As hostile groups gathered and their confrontation worsened, municipal and county authorities failed to take actions to calm or contain the situation.

At the eruption of violence, civil officials selected many men, all of them white and some of them participants in that violence, and made those men their agents as deputies. In that capacity, deputies did not stem the violence but added to it, often through overt acts that were themselves illegal. Public officials provided fire arms and ammunition to individuals, again all of them white. Units of the Oklahoma National Guard participated in the mass arrests of all or nearly all of Greenwood’s residents.

They removed them to other parts of the city, and detained them in holding centers. Entering the Greenwood district, people stole, damaged, or destroyed personal property left behind in homes and businesses. People, some of them agents of government, also deliberately burned or otherwise destroyed homes credibly estimated to have numbered 1,256, along with virtually every other structure — including churches, schools, businesses, even a hospital and library — in the Greenwood district. Despite duties to preserve order and to protect property, no government at any level offered adequate resistance, if any at all, to what amounted to the destruction of the Greenwood neighborhood Although the exact total can never be determined, credible evidence makes it probable that many people, likely numbering between 100-300, were killed during the riot.

Not one of these criminal acts was then or ever has been prosecuted or punished by government at any level: municipal, county, state, or federal. Even after the restoration of order it was official policy to release a black detainee only upon the application of a white person, and then only if that white person agreed to accept responsibility for that detainee’s subsequent behavior. As private citizens, many whites in Tulsa and neighboring communities did extend invaluable assistance to the riot’s victims, and the relief efforts of the American Red Cross in particular provided a model of human behavior at its best. Although city and county government bore much of the cost for Red Cross relief, neither contributed substantially to Greenwood’s rebuilding, in fact, municipal authorities acted initially to impede rebuilding.

Despite being numerically at a disadvantage, black Tulsans fought valiantly to protect their homes, their businesses, and their community. But in the end, the city’s African-American population was simply outnumbered by the white invaders In the end, the restoration of Greenwood after its systematic destruction was left to the victims of that destruction. While Tulsa officials turned away some offers of outside aid, a number of individual white Tulsans provided assistance to the city’s now virtually homeless black population. But it was the American Red Cross, which remained in Tulsa for months following the riot, that provided the most sustained relief effort. Maurice Willows, the compassionate director of the Red Cross relief, kept a history of the event.

What’s in a Name? Riot vs. Massacre

In recent years there has been ongoing discussion about what to call the event that happened in 1921. Historically, it has been called the Tulsa Race Riot. Some say it was given that name at the time for insurance purposes. Designating it a riot prevented insurance companies from having to pay benefits to the people of Greenwood whose homes and businesses were destroyed. It also was common at the time for any large-scale clash between different racial or ethnic groups to be categorized a race riot.

What do YOU think?

Definition of RIOT: a tumultuous disturbance of the public peace by three or more persons assembled together and acting with common intent. Definition of MASSACRE: the act or an instance of killing a number of usually helpless or unresisting human beings under circumstances of atrocity or cruelty.