Skelly Oil Company’s
The original building was at Fourth Street and Boulder in the 1920s – these tiles were in the entry to the building. The next building was between Main and Boulder on Fifteenth Street, completed in 1960. The Skelly Mansion is at 21st St. and Madison. W.G. Skelly was known as “Mr. Tulsa.” Skelly was the first company to print the specification on a tag attached to a lubricant can—Tagolene brand. Skelly Stadium, Skelly Drive, and Skelly Elementary School are named for W.G. Skelly and the University of Tulsa’s radio station carries his initials: KWGS.

The dedication plaque from the 21st
The dedication plaque from the 21st Street Bridge on the East side of Arkansas River was named the 23rd Street Bridge on the West side of the river. Despite the depression, it was begun in 1931. Tulsa needed a second bridge across the Arkansas because of southward growth. It had the 11th Street Bridge, which replaced the original pedestrian-wagon toll bridge and was on Route 66. Notice the title of Chairman of Water and “Sewerage.”

Hillcrest Hospital
Hillcrest Hospital began as Morningside Hospital in 1918 under the guidance of Dolly McNulty, RN. It was opened in response to an influenza epidemic after WWI. Hillcrest had a nurses school and residence (according to 1947 article) and was affiliated with the University of Tulsa.

Hillcrest was the site of the first heart surgery ever done in Oklahoma and the first kidney transplant in Tulsa. It serves as a regional burn center for eastern Oklahoma, has a specialized rehab program called the Kaiser Rehabilitation Center (Zink Village), and a Center for 55+ and Center for Women’s Health.

The Hunt Building
The Hunt Building was built in the art deco style in the 1920s. It was the home of Brown Dunkin Department Store at the southeast corner of Fourth and Main Streets. Brown Dunkin, which evolved into Dillard’s, was one of the largest department stores in the Southwest, occupying six of the floors.

The Five Moons
The Five Moons are 5 Native American Ballerinas who gained worldwide reputations in their artistry. Maria and Marjorie Tallchief were Osage Indians, Rosella Hightower is a Choctaw, Yvonne Chouteau is Cherokee and Moscelyne Larkin is Shawnee.

In 1957 a new Ballet called the Four Moons was written to highlight Maria Tallchief, Hightower, Chouteau, and Larkin.In 1967 Marjorie replaced sister Maria in the role. Hence, The Five Moons.

The Perryman Steps
The Perryman Steps were carved in 1893 for George Perryman, by a tramp stonecutter. His daughters mounted horses from those steps to ride side saddle. He had the initials of his son Mose S. Perryman (MSP 1893) carved into the steps. They first stood at 510 S. Main where Bishop’s Restaurant was located and left there when George Perryman sold the land. Lon Stansberry purchased the lot and moved it to three homes, finally to a home at 2405 E. 26th Place before it became the property of Tulsa Historical Society.

T. J. Archer Co.
T. J. Archer Co. in 1905 was a furniture, coffin, and wagon store owned by Jeff Archer near the Frisco Railroad , facing west on Main Street. He was an enterprising young man whose first products were half a barrel of cider and a box of gingersnaps to sell to railroad workers. His first store in 1882 had wooden sides with a tent top. He later built a larger store. Archer was part Cherokee Indian and married Annie, daughter of George Mowbray. Jeff died 30 days after someone shot a gun in his store and hit a keg of blasting powder, causing an explosion. George Mowbray helped Annie run brick store she built.

J.M. and H.C. Hall
J.M. and H.C. Hall established the first non-Indian store in Tulsa as a tent to provide supplies to the railroad in 1882. The Halls built the first store and secured a $10,000 government permit to do business in the Creek Nation. J.M. Hall raised the building to a two story wooden store in 1891. The first church services were held on the steps of the store. The Tulsa Banking Co. conducted business here after the 1897 fire. The first telephone company also had offices in the store. J.M. Hall built a two story brick store in 1902. The stores were on the south side of the Frisco right of way, facing east. Hall was an active civic leader and lived to be in his 90’s.

The Cupola
The Cupola is from the East Second Library, which was at 2537 E. 2nd Street. R.T. Daniel had donated the land to the city. When the library walls began to buckle, they decided to demolish the library in 1996, and built the new Kendall-Whittier Library. The cupola was first placed on the new library’s grounds, and then donated to the Tulsa Historical Society. 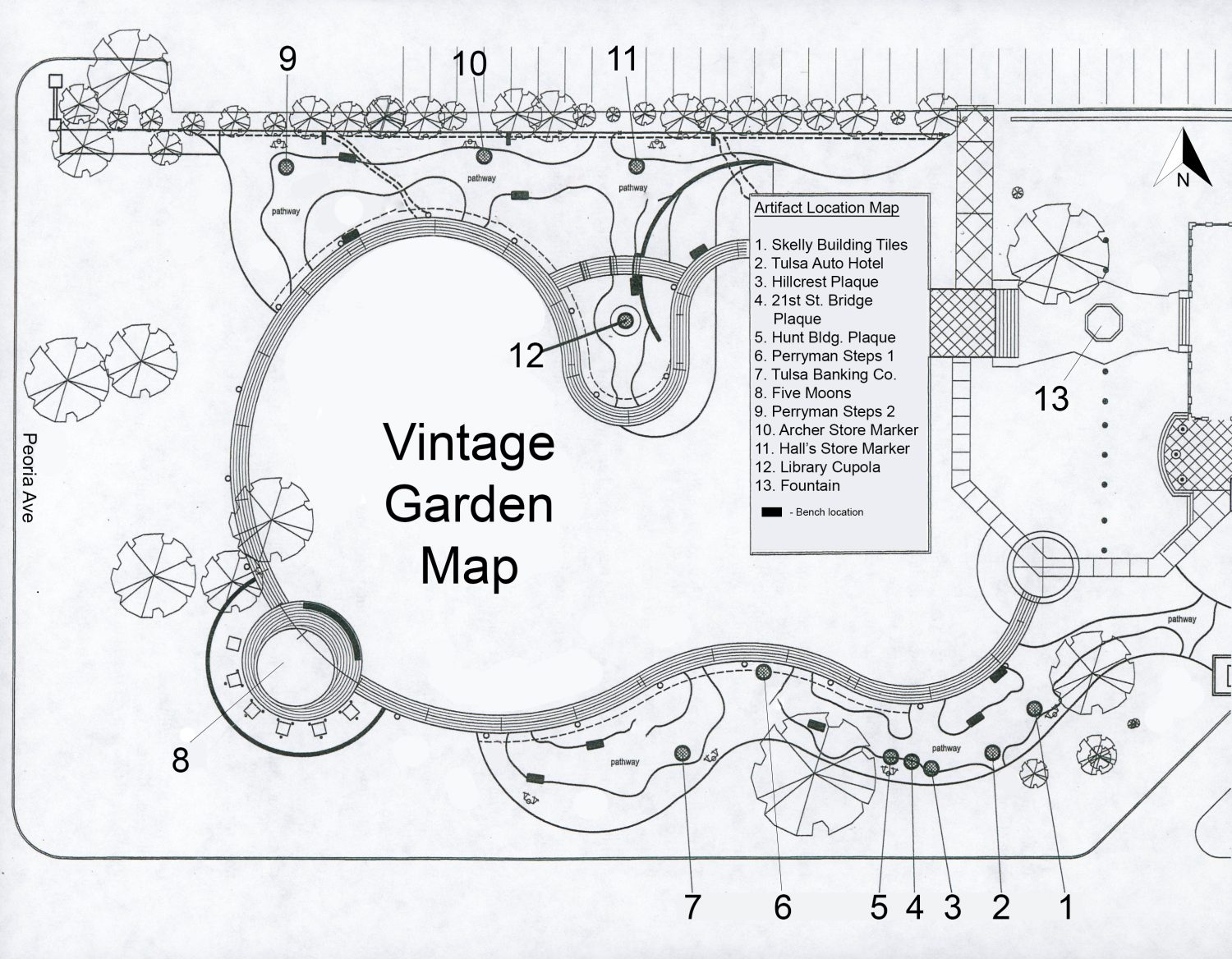 Download the full guide or pick one up at the museum front desk.