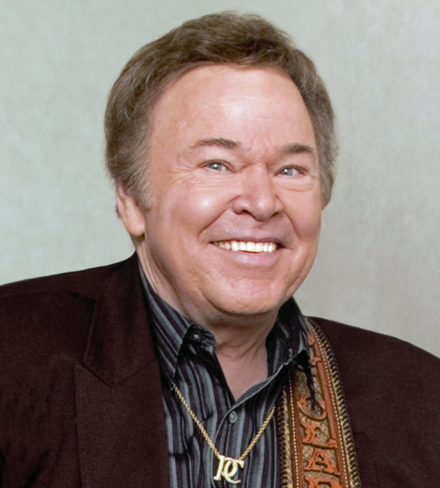 Roy Clark was 15 when he earned $2 for his first paid performance with his dad’s band in Washington D.C. He started playing weekends at bars and hot spots and then, dropping out of school, played every night. Then he made his first appearance on the Grand Ole Opry. He had arrived. He was 17 years old.

Highly regarded as a guitarist and banjo player, Clark is also skilled in classical guitar and several other instruments, recognized as one of the world’s finest multi-instrumentalists and one of the first cross-over artists to land singles on both the pop and country charts. Turning to television in the late ‘60’s, he combined his musical and comedic talents to star in “Hee Haw,” a country variety show. Watched by millions, it would become one of the longest-running syndicated programs in television history. He opened the Roy Clark Celebrity Theatre in Branson, Missouri in 1983, becoming the first country music star to have his own venue there. It marked the trend that saw Branson become a center of live music performance. However, he considers the highlight of his career a pioneering, sold-out 1976 tour of the then-Soviet Union.

Clark is the first country artist to headline at the Montreux International Jazz Festival in Switzerland, he appeared in London on “The Tom Jones Show,” has a star on the Hollywood Walk of Fame, is a member of the Gibson (Guitar) Hall of Fame, the Oklahoma Music Hall of Fame, the first country artist inducted into The Entertainers Hall of Fame in Las Vegas, a winner of the Academy of Country Music’s Pioneer Award and the Minnie Pearl Humanitarian of the Year Award, and the 63rd member of the Grand Ole Opry. Somewhere in there, he played Carnegie Hall.

Roy and Barbara, his wife of almost 50 years, have made their home in Tulsa nearly 40 years. There is a school named after him in the Union School District and he remains actively involved with the children who attend Roy Clark Elementary. After all, as he says, live performance is what it is all about.