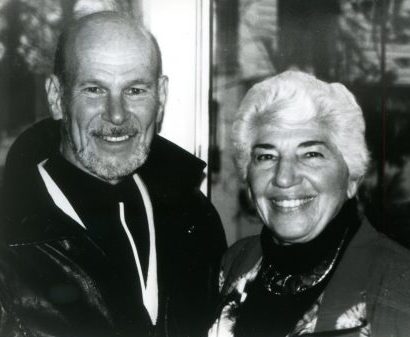 A partnership of 51 years is a remarkable achievement, particularly between attorneys. In the case of Nancy and Raymond Feldman, it has been a partnership marked by adventure, long hours at work and a deep commitment to the citizens of Tulsa.

Nancy Feldman became a Tulsan in 1946, when her marriage to a “Tulsa boy,” Raymond, brought the recent law school graduates of the University of Chicago to the city. Although the demands on her time included raising a young, growing family and establishing a teaching career in sociology at the University of Tulsa, Mrs. Feldman could not help being affected by the racial segregation that pervaded Tulsa in the early 1950’s. Her reaction was to join the board of the National Association for the Advancement of Colored People and to become an active volunteer for the organization. That belief in the equality of all humans, led her to service with the Tulsa Urban League and the Tulsa Center for the Physically Limited. As a founder and first president of The Center, Mrs. Feldman demonstrated her recognition that barriers other than race prevented equal participation in society.

Raymond Feldman’s service to improving the climate of justice compliments Mrs. Feldman’s activities. A Tulsa native and 1938 graduate of Tulsa Central High School, Mr. Feldman returned to the city following law school. After a brief stint working for another attorney, he began a firm which provided the foundations for the current Feldman Hall Franden Woodard & Farris. His legal background made him an effective volunteer for the Oklahoma Civil Liberties Union, as well as the Oklahoma Human Rights Commission and the Tulsa Human Rights Commission.

The complimentary nature of the Feldmans’ partnership extends to Tulsa’s health and human services community. Mr. Feldman’s service as chairman of the Tulsa Chapter of the American Red Cross is matched by Mrs. Feldman’s activities on behalf of the Planned Parenthood Federation of America. Recognizing that prevention may be the best remedy, the Feldmans have helped Tulsans to be prepared for the responsibilities of coping with natural disasters, as well as to being well prepared for the responsibilities of coping with a family. Tulsa’s Arts and education communities also have benefited from the Feldmans’ unique partnership. Active on the board of the Tulsa Ballet Theatre, Mrs. Feldman served as the Ballet’s president from 1978-1981. Mr. Feldman put his efforts into service for the Tulsa Arts and Humanities Council. Together, they established the Council’s annual award made to individuals who excel in the Arts, “The Jingle Feldman Award,” as a living memorial to their late daughter. A similar approach to combining the Arts and education is evidenced in Mr. Feldman’s involvement as one of the founders of the Simon Estes Education Foundation. And, while Mr. Feldman has been busy providing money for education, Mrs. Feldman recently has been busy collecting money for education. Her tenure as a board member and past president of Roger’s University placed her at the center of the university’s recent, rapid growth within the community.

The Feldmans’ records of long hours of work and commitment to Tulsans could be an adventure in itself, however, the Feldmans find adventure in other places as well. The Feldmans travel. And, the Feldmans seldom travel in armchairs. Their annual treks through some of the most remote parts of the planet have become a Tulsa legend. Their Tulsa home is well known for the collection of souvenirs, ranging from high art to high kitsch, they have brought back from their travels. And while these trips form a deeply personal aspect in the Feldmans’ continuing search for education and awareness, they have generated benefits for Tulsa, as well. The Tulsa Global Alliance, an organization dedicated to connecting Tulsa to the world, had Nancy Feldman as one of its founders.