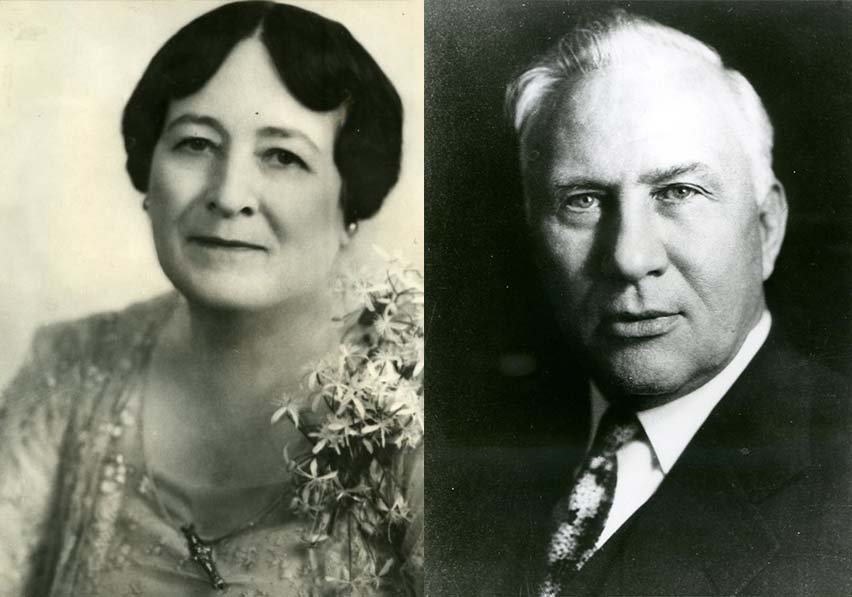 Jane Heard & Fred Severs Clinton were Tulsans whose aspirations for their city knew no bounds.

Jane Heard Clinton was born in Elberton, Georgia, to a family whose colonial ancestry placed it squarely in the center of the southern aristocracy.  Her education stressed genteel refinement.  It was based upon the classics and the arts; particularly music, an area where Mrs. Clinton excelled.  While attending a college social function she met a medical student from Indian Territory and, despite the ties of tradition and security, she married the young doctor in 1897.

Following a brief period in the family home in Red Fork, the Clintons moved to Tulsa.  In this community, which lacked even paved streets, Mrs. Clinton decided culture would flower.  During the subsequent decades, she was a founder or charter member of every cultural organization in the city, including; the Tuesday Book Club, the Ruskin Art Club, the Tulsa Garden Club and Philbrook Art Center.  Her proudest achievement was the founding of the Hyechka Club, an organization dedicated to the creation of music through performances and scholarships.  Mrs. Clinton served as Hyechka’s first president and in 1920 was named President for Life.

Fred Severs Clinton was born in Indian Territory and settled with his parents in Red Fork in 1884.  His formal education began in the mission schools of the Creek Nation and concluded at the University Medical College in Kansas City, where he earned an M.D. in 1897.  Along the way he attended Young Harris College in Georgia, where he met and eventually married Jane Heard.

Dr. Clinton’s medical career included many “firsts.”  He organized Tulsa’s first hospital and nurse’s training school in 1906.  He was the first representative of the American Red Cross in Indian Territory and worked actively in the organization following statehood.  Dr. Clinton was the first company surgeon for every railroad which served Tulsa, including the Tulsa Street Railway.

The list of Dr. Clinton’s “firsts” extends beyond the medical field.  Together with Dr. J.C.W. Bland, he drilled the first producing oil well in Tulsa County, an oil well that was to impact Tulsa forever.

Dr. Clinton was an early Tulsa Booster and was a founder of the Commercial Club.  His service to his city continued full apace throughout his life, and somehow, he found time to write down his experiences in a series of articles and became one of Oklahoma’s most noted historians.