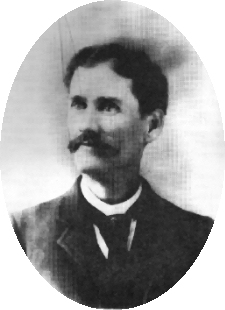 James Monroe Hall was a pioneer Tulsan whose arrival with the Frisco Railroad in 1882 marked the beginnings of modern Tulsa. Hall, credited as being the “Father of Tulsa,” operated a general merchandise store, J.M. Hall & Co., for several decades on Main Street. He established Tulsa’s first church and founded the Tulsa school system. Hall was the guiding force in shaping the future of schools and churches at their roots. He believed that schools and churches formed the backbone of a community.

Hall also became involved in the earliest banking business in “Tulsey Town” when he embarked a 20 year banking career as a director in the Tulsa Banking Company, which opened in 1895. This institution eventually grew into one of the largest and most influential banks in the state and is in successful operation today. In early 1899, the Tulsa Banking Company was nationalized and the name changed to First National Bank of Tulsa.

Hall’s endless contributions toward the establishment of Tulsa were captured in a nutshell by Lerona Rosamond Morris in 1927 from “Tulsa The City Beautiful!”

“J.M. Hall—Tulsa’s First Citizen” “It is a wonderful experienceto be the father of a town; to indeed be its first citizen; to see its first railroad construction; to mark off its first street; to own its first store; to be pioneer postmaster; to organize its first school, its first church, its civil government and endure all the hardships of primitive frontier life in the midst of wild Indians; to be visited by bold, bad men of the Cook and Dalton gangs; to see the tiny trading post develop into a small village—the village into a real town; to be the leading spirit in all its enterprises for development; to see a territory become a state; to see the small cowtown become the Oil Capital of the World; to actually live and have a vital part of a town grown from one to one hundred and fifty thousand souls. Such has been the thrilling experience of J.M. Hall”