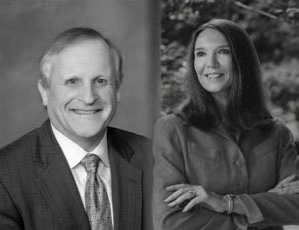 Born in Kansas City, MO, Howard G. Barnett was immediately adopted by Florence Lloyd Jones Barnett and Howard G. Barnett. They brought him to Tulsa which has been his home ever since. He graduated from Edison High School and received his B.S.B.A. from the University of Tulsa and a Juris Doctorate from Southern Methodist University.

Barnett began his career in 1975 as a business lawyer in Tulsa specializing in securities offerings and corporate transactions primarily for the growing number of entrepreneurial oil and gas companies. In 1985, he joined Tribune Swab-Fox Companies Inc. as executive vice president and COO of its daily newspaper subsidiary, Tulsa Tribune Company. He eventually became chairman and CEO of the parent company, leading a significant turnaround resulting in its sale to V,S & A Media Partners II in 1997.

Barnett entered state government in 1998 as secretary of commerce for Oklahoma Governor Frank Keating and as the director of the Oklahoma Department of Commerce. In 1999, he became Governor Keating’s chief of staff serving until the end of Keating’s term in January 2003. He is now managing director of TSF Capital, LLC in Tulsa, a firm providing specialized merchant banking services to small companies.

Barnett’s civic activities include the Tulsa Metro Chamber, Leadership Oklahoma, Holland Hall School, Tulsa Industrial Authority, and Hillcrest Hospital. He was a member of the Governor’s Council on Science and Technology and Tulsa’s Centennial Celebration Committee.

He is currently a board member of the Philbrook Museum of Art, Leadership Oklahoma, The Center for Nonprofits, Youth Services of Tulsa, the Oklahoma City National Memorial and the Oklahoma Academy.

In 2006, Barnett was the Republican nominee for state treasurer of Oklahoma.

Billie Barnett gradated from high school in Kirkwood, MO and from Texas Woman’s University in Dallas, Texas with bachelors in Nursing. She then served on the RN nursing staff at Presbyterian Hospital in Dallas and on the Nursing School faculty for Tulsa Junior College in Tulsa.

Barnett has received numerous awards for her civic and philanthropic leadership including: the Elizabeth K. Doenges Award from the Tulsa Arts and Humanities Council, the Governor’s Arts Award, The Marilyn Douglas Memorial Award from the Oklahoma Arts Council, the Pinnacle Award from the Mayor’s Commission on the Status of Women, the March of Dimes Great Spirit Award, the National Philanthropy Day Outstanding Volunteer fundraiser awarded from the Association of Fundraising Professionals.

She has served on the Oklahoma Arts Council, the American Heart Association, the Tulsa Philharmonic and the Child Abuse Network Advisory Board. Currently she serves on the boards of the Tulsa Ballet, the Tulsa Community College Foundation, the Salvation Army Advisory Board, the Oklahoma Arts Institute, the Price Tower Arts Center, the Mid America Arts Alliance and Family and Children’s Services Advisory Board. She is a sustaining member of the Junior League of Tulsa and alumnae and past president of Kappa Alpha Theta.

The Barnett’s have two daughters, Adrienne and Allison.

Together they have chaired or co-chaired many fundraising activities for nonprofits in Tulsa including the following: Hillcrest CrestFest, the Hillcrest Gala, The Ballet Ball, the capital campaign for Youth Services of Tulsa, the Holland Hall Annual Fund, the Heart Ball, the committee to pass State Questions 680 and 681, the Tulsa Ballet Founder’s Society, Leadership Oklahoma Gala, the Annual Fund drive for Tulsa Community College Foundation, the fundraising arm to pass Vision 2025, the Helmerich Award Dinner for the Tulsa Public Library, the Salvation Army Benefit Dinner, Tulsa’s Celebration of the Oklahoma Centennial, the Philbrook Wine Experience.

They are the Directors of the Barnett Family Foundation.