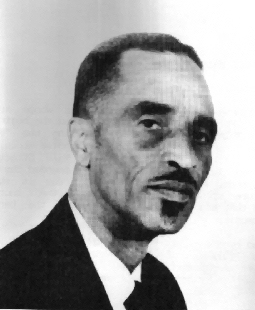 Benjamin Harrison Hill’s contributions to Tulsa derived from his double role as a leading religious figure and a state lawmaker. His accomplishments provided a peaceful transition for the community during the racially turbulent sixties. He was born in Sydney, Nova Scotia, November 1, 1903. His family moved to Pueblo, Colorado, where he spent his childhood years. Hill earned a graduate degree at Wilberforce University in Ohio and studied law at the University of Nebraska. While teaching at Campbell College in Jackson, Mississippi, Hill met his wife, Fannie Ezelle Johnson. They were married 39 years and had a son, George Forris.

Services to God and humanity motivated Hill to pursue his career as a minister, teacher and public servant. In 1938, he was licensed to preach at the St. John A.M.E. (African Methodist Episcopalian) Church in Plains, Georgia, and subsequently led other congregations in Boley, Claremore, Muskogee and Tulsa in Oklahoma. Hill was a junior high school principal for many years in Okfuskee County and pioneered the area of special education for slow learners. He contributed to the A.M.E. church in many ways while serving as Director of Christian Education, chairman of the Commission on Educational Institutions, member of the Episcopal Committee, secretary of the General Conference and editor of the A.M.E. Church Review.

From 1951, Hill served as editorial editor and columnist for the Oklahoma Eagle. He was active throughout Tulsa and the state of Oklahoma in community-oriented organizations including the Tulsa Urban League, the Tulsa Council of Churches, the National Conference of Christians and Jews, the Ministerial Alliance, the Boy Scouts of America and the Council of Churches and Community Chest. Hill also served as director of the Tulsa Economic Task Force and president of the Tulsa branch of the NAACP. For his notable achievements in the community, Hill was named Tulsa’s outstanding citizen by the Tulsa Park and Recreation Department; a park and recreation center was named after him —the Ben Hill Recreation Center.

At the time of his death in 1971, Hill was a member of the Oklahoma State House of Representatives having served two terms. In his 31 years of service as a prominent Tulsa leader, he gained recognition as a progressive thinker, a creative legislator and one who sought practical solutions. Hill always had an encouraging message and provided a sense of worth to individuals on any social and economic level.