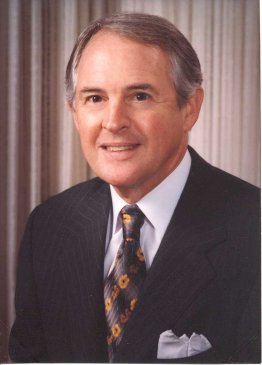 Tulsa native Ray H. Siegfried II acquired a bankrupt NORDAM with eight employees in 1969.  The NORDAM Group is now an international aviation service and manufacturing company with six divisions on three continents, and a staff of over 2,500.

Siegfried graduated from the University of Notre Dame where he was on the boxing and wrestling teams.

He has chaired the Metropolitan Tulsa Chamber of Commerce and the Tulsa Area United Way and serves on boards of Notre Dame, the Tulsa Community Foundation, and the Oklahoma Aquarium Foundation.

He’s led such diverse groups as the American Boxing Federation, the Tulsa Aerospace Alliance, the Tulsa Day Center for the Homeless, and the Institute of Nautical Archeology at Texas A&M University.

Recognition for his service has come from Honorary Doctorate degrees from Notre Dame and the University of Portland,  the National Conference for Community and Justice,  the American and National Management Associations, the Oklahoma Hall of Fame, the Tulsa Press Club, and with his wife Milann from the National Jewish Medical and Research Center.

He and Milann have six children and four grandchildren.  He is a devout Roman Catholic, an affiliate of St. Augustine Order, and was instrumental in establishing the chapel at the Tulsa International Airport.

Tulsa is fortunate that Ray Siegfried continues to serve his church, his family, and his community with grace, love, and humility.