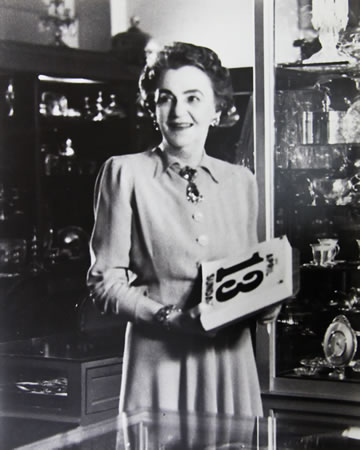 Miss Jackson’s, one of Tulsa’s longtime traditions, of fashion excellence, came about because of the woman from whom it is named.  Nelle Shields Jackson gave up a job as a personal shopper in the McCreery and Co. Department Store in Pittsburgh, Pa. to move to Oklahoma at the age of 35.  She worked for two years as a corsetiere at what would become Vandevers.  The first Miss Jackson’s shop sold lingerie on the balcony of a jewelry store.  As the shop grew in size, it moved three times before becoming the first tenant of the new Philtower Building in 1928.  Nelle retired in the 1950s and died in 1966, but her shop, now located in Utica Square, remains.  It has been owned and operated by Bill Fisher Jr. since 1967