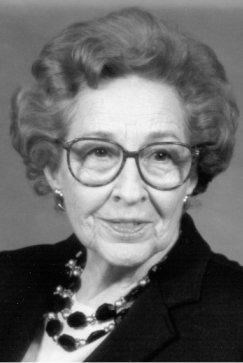 As “First Lady of Oklahoma Libraries,” Lillian Norberg’s legacy is incalculable. Every adult or child who has used the library system is indebted to her for her work.

Born in Seminole, Oklahoma, she graduated with a degree in Literature and Linguistics from Emerson College in Boston. She taught in Maine until her father’s death, when she returned to Oklahoma and assumed care of her siblings.

She married Hans A. Norberg in 1938 and the couple had three children.

Her volunteer efforts began with PTA and Girl Scouts on behalf of her siblings. Her volunteerism grew, and in 1957 she spearheaded the successful campaign to build Tulsa’s new Central Library and expand its branch service. She founded Friends of the Tulsa Public Library and was instrumental in the establishment of numerous “Friends” groups throughout the state. For this, she has been honored locally, regionally, and nationally.

She is noted for her civic leadership and philanthropic support of the arts and literature, having served with the City Park Board, the Tulsa Philharmonic Women’s Association, the Arts Council, Tulsa Alumnae Panhellenic, Assistance League, Metropolitan Opera Auditions, and the League of Women Voters. She is a member of Alpha Phi sorority and Patroness of Sigma Alpha Iota, women’s music fraternity.

She has received much recognition, including the Citizen’s Award from the Oklahoma Library Association and the Harwelden Award from the Arts and Humanities Council of Tulsa. The city of Tulsa has named Norberg Park in her honor, at East 31 st Street and Garnett Road.

Her presidencies, chairmanships, achievements, and awards are the record of a lifetime devoted to enhancing the quality of learning in Tulsa—and far beyond.