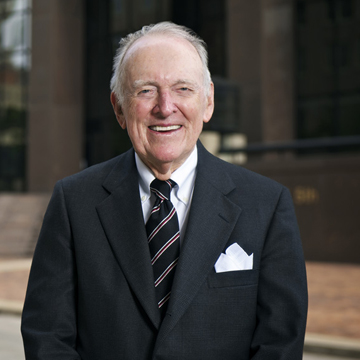 Judge Joseph W. Morris has been at more than one crossroads during his career if, as defined by the first century Roman philosopher Seneca, a crossroads is where opportunity and preparation meet.

The opportunity he took was a job with Shell Oil in Tulsa. He stayed there from 1948 to 1960, even spending some time in Shell’s New York City offices. He returned to Tulsa in 1960 to become associate general counsel of Amerada Petroleum, later Amerada Hess.

Morris found himself at a new crossroads when Dr. J. Paschal Twyman, president of The University of Tulsa and a frequent tennis opponent, offered him a position as dean of TU’s law school. He filled that role from 1972 to 1974.

President Richard M. Nixon presented Morris with the next crossroads by nominating him to serve as chief judge in the Eastern District of Oklahoma at Muskogee, a job he admittedly enjoyed.

This could have been the last stop in an impressive career but the CEO of Shell Oil invited him to become the company’s vice president and general counsel. Morris took that opportunity and agreed to relocate his family to Houston in 1978. He returned to Tulsa in 1984 when GableGotwals extended its hand to him. He has been a member of that law firm’s board and shareholder for 28 years.

He also is an adjunct professor at TU, teaching arbitration law.

Morris has received many accolades and honors for his professional and civic service. He met the challenges of the many crossroads that came his way as he focused on being a practicing lawyer, a teaching lawyer, and a judging lawyer.