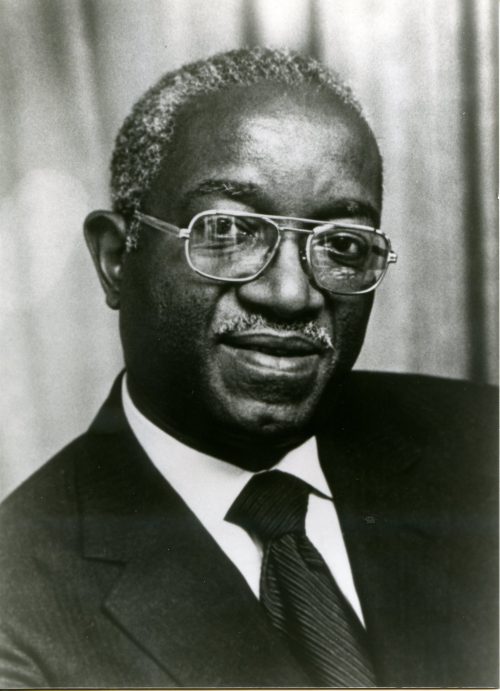 If a commitment to reason and justice is the hallmark of a civilized person, then John Hope Franklin certainly must be considered among America’s most civilized individuals.  Through a career that includes accomplishments in the fields of teaching, writing and public policy, these dual principles have been the common denominator in each of his endeavors.

John Hope Franklin was born on January 2, 1915 in Rentiesville, Oklahoma, the youngest child (and only son) of Buck Colbert and Molly Franklin.  The family moved to Tulsa in the early 1920’s where B.C. Franklin’s law practice provided early lessons for the young Franklin on the relationship between individuals and the law.  This exposure to the law combined with the family’s deeply held beliefs on the importance of education formed a pattern that would be evidenced in Franklin’s entire career.

Franklin is a teacher.  His career has included positions at Fisk University, St. Augustine’s College, North Carolina College at Durham and Howard University.  At Brooklyn College he held the posts of professor and chairman of the history department beginning 1956.  In 1964 Franklin began teaching at the University of Chicago, an institution where he would also serve as the history department chairman and subsequently be named John Matthew Manly Distinguished Service Professor in 1969.  Additional positions have allowed him to teach in Salzburg, Austria, Cambridge University in England and Australia, where he was a Fulbright professor at several universities.  Currently, Franklin is John B. Duke Emeritus of History at Duke University.

In his capacity as a lecturer Franklin’s service includes several universities in India under auspices of the American Council or Learned Societies and the Department of State.  His international experiences also include stints in South America, the South Pacific and East Asia as Lincoln Lecturer for the Board of Foreign Scholarships.  In America’s bicentennial year Franklin was selected by the National Endowment for the Humanities as the 1976 Jefferson Lecturer, the nation’s highest honor for humanities scholars.  And, in 1988 Franklin returned to his hometown to present the 1988 Oklahoma Lecture in the Humanities.

Franklin’s influence on America’s education has not been limited to those fortunate enough to attend his classes or be in the audience of his lectures.  His career in publication began in 1943 with the appearance of THE FREE NEGRO IN NORTH CAROLINA, 1790-1860 and has continued to the present time with the inclusion of ten additional volumes.  The publication of FROM SLAVERY TO FREEDOM; A HISTORY OF NEGRO AMERICANS in 1947 is an event of particular significance as the book has been widely used as the text for Black studies courses universities throughout the world.  In addition to his own books, Franklin’s publication in scholarly journals and his editorship of many editions have produced a body of work that has made a tremendous impact on the American public.

Franklin has been the recipient of numerous honors for his work.  His colleagues elected him president of the American Studies Association (1967-1968), the Southern Historical Association (1970-71), THE Organization of American Historians (1974-75) and the American Historical Association (1978-79).  In 1964 he was elected to membership in the American Academy of Arts and Sciences.  His election to the Oklahoma Hall of Fame in 1979 marked the first time a Black Oklahoman has been elected to that body.  During his distinguished career, Franklin has received presidential appointments to the National Council on the Humanities and the Advisory Commission of Public Diplomacy and was named a United States delegate to the twenty-first General Conference of UNESCO.

In the arena of public affairs Franklin’s counsel is sought by America’s leading figures.  His work as a member of the research team in the Supreme Court’s landmark BROWN VS THE BOARD OF EDUCATION was integral to the outlawing of the segregation in education Franklin personally experienced throughout his career.  His participation in the vanguard of the civil rights movement included his presence in Selma, Alabama in 1965 at the historic march led by Dr. Martin Luther King.

The astounding total of achievements and honors amassed by Franklin serves as a testament to the commitment to two simple principles learned in his earliest years.  Reason and justice are principles that have led him from a limited, segregated Oklahoma in the 1930’s to his recognition as the preeminent American historian.