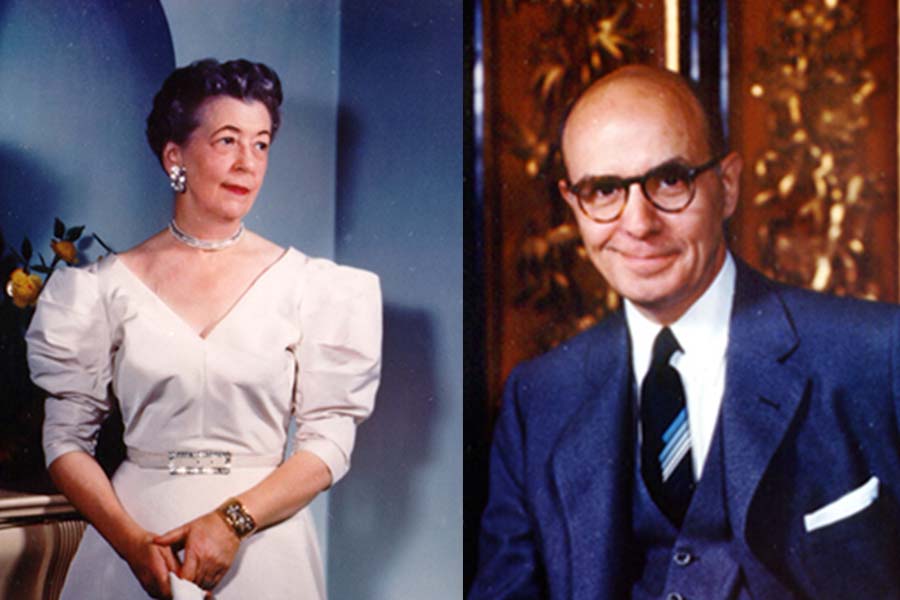 In a city widely known for its civic spirit and the ample generosity of its early leaders, the commitment of Grace and Franklin Bernsen has fostered notable contributions to the quality of life for the citizens of Tulsa.

Franklin Bernsen received his early education in Pennsylvania and New Jersey, before being graduated from Williams College in 1915. He then joined his family in California, where his good looks landed him jobs as an extra in a number of silent films, including the Charlie Chaplin production, A Night at the Show. The young Bernsen held a variety of jobs during this period. One of these was particularly significant. He was hired as a driver for a Canadian family visiting Los Angeles. Included in the Wilson family was a daughter, Grace, who would become Mrs. Franklin Bernsen.

Following his service in World War I, Bernsen joined the Lucey Manufacturing Corporation. His obvious talents in the oil business attracted the attention of management, who sent him to the oil fields around Covington, Oklahoma. In that booming environment, Bernsen attained rapid success and became the President of the Lucey Products Company fewer than ten years after joining the organization.

The Bernsens were a popular couple. As world travelers, they always had interesting stories that entertained their Tulsa friends. They were also active in a broad spectrum of civic institutions and organizations, such as the First Presbyterian Church, the Philharmonic, Philbrook Museum and the Boy Scouts. The Bernsens’ quiet financial support made important improvements in Tulsa. As an example, their donation of a neonatal, intensive care facility allowed St. John Hospital to provide complete care for newborn infants.

An awareness that the philanthropic efforts that marked their lives in Tulsa could continue following their deaths led to their establishment of a foundation bearing their names. The Bernsen Foundation’s participation in the on-going funding of the Tulsa Ballet and the Tulsa Historical Society put “breathing room” in those organizations’ operating budgets. Additionally, major gifts have allowed for large capital improvements to institutions such as the Tulsa Boys Home and the Little Lighthouse.

The recent completion of the Bernsen Family Life Center for the First Presbyterian Church is a project that exemplifies the Bernsen’s philanthropy. The project created a much needed facility for the church, which was the institution closest to the Bernsen’s hearts. In addition, the adaptive reuse of the former Masonic Temple saved a landmark in downtown Tulsa that was threatened by an ever-expanding sea of asphalt parking lots. It would have been typical of Grace and Franklin Bernsen, who passed away in the early 1980’s, to achieve two important goals for Tulsa with one act of generosity.