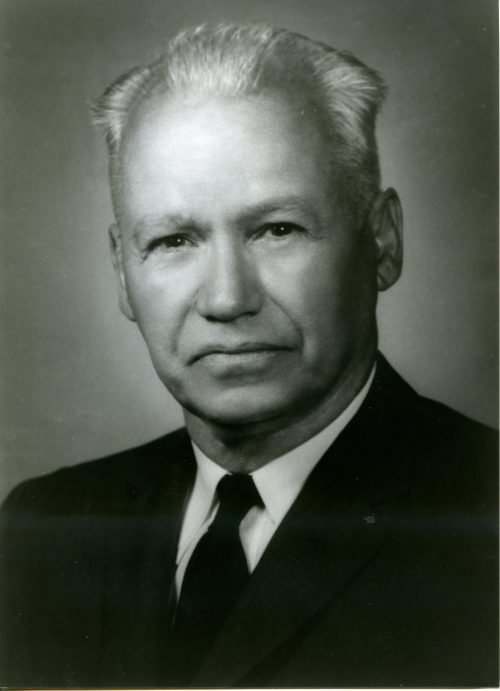 Waldo Emerson “Dode” McIntosh is much like Tulsa.  Like the city he has called “home” since the early 1920’s, McIntosh is firmly rooted in the history and traditions of the Creek people.  And, like the city, McIntosh has used these foundations to promote growth and development in the highly anglicized world of modern Tulsa.

Waldo Emerson “Dode” McIntosh was born on February 29, 1893, in Smith County, Tennessee, a descendant of noted Creek chiefs since the Colonial times.  In 1901 the family moved to Checotah, Indian Territory, a territory offering many opportunities set against a backdrop of Native American culture.

It was in 1901 that Dode experienced the event which he professes was the most important of his life.  He met an eight-year-old tomboy named Lulu Vance.  The couple courted for many years and eventually eloped in 1914.  The immediate bond that was created between the two eight-year-olds would continue until Lulu’s death in 1987.  Their union produced four sons and one daughter.

McIntosh made his living in the lumber business for many years in Checotah and Miami.  However, his interest in politics and a desire to serve the public compelled him to run for election of the post of city clerk of Checotah.  He served in the position for two terms, terms that were interrupted by his service in the U.S. Army during W.W.I.  His political activities in Northeastern Oklahoma continued with his service as Ottawa County Democratic chairman for eight years.  In the early 1920’s McIntosh moved his family to Tulsa.  He was appointed to the post of Tulsa County Assessor to fill an unexpired term.  He returned to elected office in 1959 as the Tulsa County Treasurer, a position that held until 1963.

A great challenge was placed before McIntosh in 1961 when he was appointed Chief of the Creek Nation.  The position was not a new one to members of the McIntosh family as Dode became the fourth member of the family to be called upon for that service.  His actions on behalf of his people had a dramatic impact upon tribal affairs for the five complete terms.  Central to McIntosh’s philosophy was the belief that the Creeks must become increasingly self-sufficient.  For McIntosh the solution to this problem was education.  He worked feverishly to expand educational opportunities for tribal members including service on the Board of Regents of the Haskell Institute, the Board of Trustees of Bacone College and the National Indian Educational Advisory Committee.  Other areas of the Creeks social welfare were among his priorities including housing, medicine and economic opportunities.  McIntosh received perhaps his greatest notoriety as a champion of Creek rights in the face of the Federal Government.  Through a series of complicated legal actions, the Creeks received millions of dollars from the government in consideration of decades of treaties that had never been enforced.  McIntosh’s theme of self-reliance once again came into play as he realized that claims of the treaties would not be realized if the Creeks did not do it themselves.

McIntosh has made substantial contributions to Tulsa’s civic organizations.  His work with the Lions and the Chamber of Commerce has earned him special recognition from both groups.  He has served on the board of the Oklahoma Historical Society and was the first president of the Tulsa County Historical Society in 1962.  It is not surprising to find his mark on the institutions preserving Oklahoma’s history, for he himself is a link, a link between the state’s Indian past and its future in America’s mainstream.