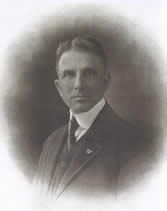 Cyrus Stevens Avery was born in 1871 in Pennsylvania and moved with his family to Missouri, where he rode a horse to attend high school. After college and marriage in Missouri, Avery moved to Oklahoma in 1897, settling in the oil boom town of Tulsa in 1908, although he’d described it once as a “little town without lights” with “pigs running loose in the streets.” He was president of his own oil and gas company by 1916, with an interest in improving roads. He helped lay out a state road plan and the national highway numbering system, becoming the champion of a road from Chicago to Los Angeles we know as Route 66.